You don't have any saved vehicles!

Look for this link on your favorites:

Once you've saved some vehicles, you can view them here at any time.

Can’t find what you're looking for? Custom Order Your Vehicle Today!

Home » All About The NEW Gladiator

All About The NEW Gladiator

he Jeep Gladiator is essentially a truck built with Jeep’s legendary toughness. Possessing a five-foot-long fixed bed, as well as a removable black top and lowerable windshield similar to its cousin (the Wrangler SUV), the Gladiator is available in several configurations. They are the following:

SPORT: The Sport serves as the base model of the Jeep Gladiator. Under the hood is the 3.6-liter Pentastar V6, an engine known for its implementation on several Chrysler vehicles. With an output of 285 horsepower and 260 lb-ft of torque, the Pentastar is hitched to a six-speed manual transmission. There’s the option, however, of swapping the Pentastar with a 3.0-liter turbodiesel V6, which outputs 260 horsepower and 442 lb-ft of torque for enhanced road-tripping or overlanding. In addition, the turbodiesel workhorse is pinned to an eight-speed automatic gearbox for a smoother and more convenient gear-shifting feel. The drivetrain the Gladiator uses is a four-wheel-drive system called the Command-Trac to engage all four wheels to keep you planted on virtually any driving surface. As a five-seater, this vehicle has two rows of cloth-trimmed seats, with the front ones being manually adjustable. For infotainment, the Sport relies on the combination of eight speakers, AM/FM radio, two USB ports for hooking up mobile devices, Bluetooth hands-free phone calling and audio streaming, a trial subscription to SiriusXM Radio, and a 5-inch touchscreen. A rearview camera serves as the truck’s driver safety aid, with six airbags providing crash protection. Also standard are traction control and electronic stability systems, brake assist, and an anti-lock braking system.
WILLYS SPORT: At the Willys Sport trim level, the Gladiator gains fender flares, rock rails for enhanced protection against rocky terrain, a limited-slip rear differential for enhanced off-road traction performance, and 17-inch alloy wheels (in place of the 17-inch steel ones) with 32-inch mud-terrain to better handle rough trails. “Willys” hood decals denote the trim’s military-style aura.
SPORT S: At the Sport S trim level, Chrysler enhances infotainment by replacing the 5-inch touchscreen with a larger, 7-inch one, and adding Apple CarPlay and Android Auto for smartphone integration. Also debuting at the Sport S level are remote keyless entry (for secure and more convenient access to the cabin via key fob), automatic climate control, and power windows.
WILLYS: The Willys combines the standard features of the Willys Sport and Sport S, with no other features added.
OVERLAND: The Overland mirrors the standard features of the Sport S, albeit with a few improvements. The 17-inch alloy wheels give way to larger, 18-inch ones, and side steps are added for easier and more secure entering and exiting. 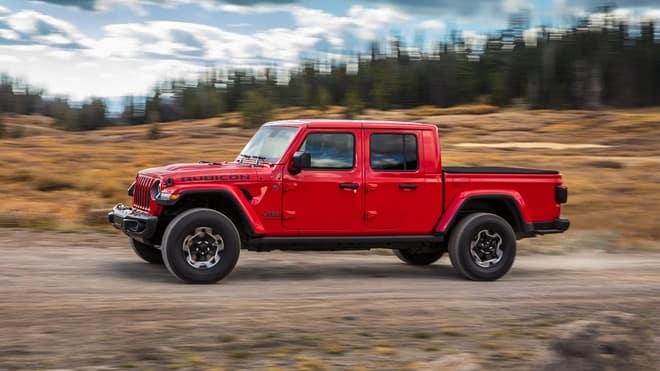 80TH ANNIVERSARY: Commemorating Jeep’s 80th anniversary, this aptly named model has “80th Anniversary” badges. Its upgrades are primarily on the infotainment front, and they include the following:
• HD Radio
• Navigation system
• Nine-speaker setup
• 8.4-inch touchscreen (in place of the 7-inch)
RUBICON: For the ultimate off-road experience with the Gladiator, go for the Rubicon, which makes its designation obvious with “Rubicon” decals. Here, the Command-Trac four-wheel-drive system is replaced by Rock-Trac, which includes locking front and rear axles for optimizing traction and an electronic sway bar disconnect for operational convenience. The Fox off-road shock absorbers are made for withstanding the most treacherous of trails, and the 33-inch all-terrain tires are tough and large enough to keep the undercarriage away from harm. The rock rails, which appear on the Willys Sport, make a comeback here. Also worth mentioning are the hood vents as an engine compartment-cooling mechanism and black fenders for a more menacing appearance.
MOJAVE: Named after the driest desert in North America, the Mojave comes with a higher-riding suspension than the Rubicon, even though it loses the Rubicon’s locking front axle. Other than that, the Mojave mirrors many of the Rubicon’s standard features. Hood decals are present to denote its trim level.
HIGH ALTITUDE: The High Altitude is the top-of-the-line Gladiator model. At this level, remote keyless entry is upgraded with proximity keyless entry, which enables door unlocking by simply having the key fob on you. Also exclusive to the High Altitude are blind-spot monitoring and rear parking sensors for optimizing driver assistance.

Ready to test-drive this unique truck? You can do so at Team One Chrysler Dodge Jeep Ram (CDJR) of Gadsden, where we serve the residents of Gadsden, Rainbow City, and Albertville, AL, among other surrounding areas. One of our exceptional specialists at Team One will be available to assist you in getting the Gladiator that best suits you

You don't have any saved vehicles!

Look for this link on your favorites:

Once you've saved some vehicles, you can view them here at any time.